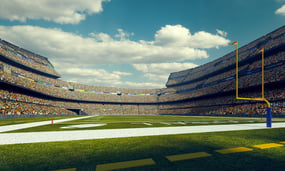 I was watching a video of what Matthew Stafford said to Joe Burrow (this year’s Super Bowl-winning and -losing quarterbacks, respectively) on the field after the Super Bowl was over, and I thought, “What, really, is the difference between these two men at the end of this game?

“Celebrate the wins” is a phrase we use and hear often. It is about taking the time to step back and appreciate the hard work we put in that led to success. I know Stafford is celebrating his win, as I’ve seen him playing golf in Vegas, watching the Lakers courtside, and enjoying the Rams championship parade. This is an important thing for our mental well-being.

But I want to challenge us to “celebrate the losses” as well. This may seem counterintuitive because it requires a growth mindset.

In a growth mindset, it is the work that you put in that truly counts. You should celebrate the hard work even if the result isn’t exactly what you had hoped… as long as you learn from it. What could you have done differently? How might you approach the situation differently next time? Do you need to prepare differently? Notice that the word shared across those questions is “differently”.

When students who are in a fixed mindset fail a test, they determine that they are not smart or not good at the subject. They determine that it is pointless to keep trying, and their desire to work hard decreases. They study less, and they do worse. When students who are in a growth mindset fail a test, they find a way to prepare differently the next time so they can succeed. They might reach out to a peer who succeeded to find out how they studied. They might ask the professor for more practice and guidance. They will take the challenge. They will find a way.

When you have a growth mindset, you don’t look at “failure” as an end. It is actually a step in the right direction. It is progress. You look at a “failure” as an opportunity to re-evaluate. Failure is not the enemy. It just means that the goal has not yet been achieved.

If Joe Burrow looked at all the work he has done in his life to get to where he is and considered it all a failure because he lost one game, he would be doing himself a HUGE disservice. My bet is that he, like all the “great” athletes (see Michael Jordan – cut from his high school team – and Tom Brady – not named a starter in college until senior year or in the pros until someone else was injured), will take that “failure” and use it to further fuel his drive to get better every day. I bet he will rise to the challenge.

Celebrate your losses and their lessons. Then turn them into wins.