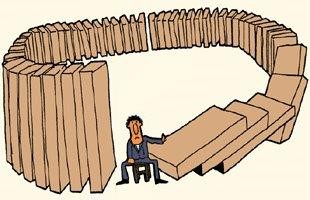 Are you leaving your compensation up to karma? I explored this concept as I thought back to the media coverage of a CEO at a known progressive Fortune 100 company.

I still can’t help but shudder over the comments of Microsoft CEO Satya Nadella at a fall 2014 women’s conference* (the largest women’s technical gathering no less!). To suggest that pay raises should be left to “karma” defies all sensibilities and any studies on the topic that point to the exact opposite! You must “ASK” for what you want and deserve, a one word theme we spent an entire day discussing in the first Signature Program in 2013.

The fact that women are not comfortable asking is beside the point. We need to get comfortable by understanding the market, knowing our value, confidently communicating that value and being specific on what we want. Yes, name the price!

To underscore this issue, two of our faculty at the Signature Program are global heads of HR. They told us that the problem of women NOT asking was so significant, that they began building in “workarounds” on their behalf. Indeed, we were told that women were offered the high end of the range because they accepted what was offered, whereas men were offered the lower end of the range because they always negotiated. And shamelessly!

After Mr. Nadella's comments, Susan Orman published her viewpoint which is still relevant. An excerpt:

"The fact is, whether an explicit strategy or implicit assumption, management preys on women's propensity to not negotiate, to be consummate team players, to be passive.

To suggest that good karma is all women need only fuels this dangerous mindset. It plays into what I see so many women hope to be true: that their good nature, get-along, consensus-building nature will be rewarded without asking. That's naïve. We're still dealing with a gender pay gap across diverse professions that often have women working at a discount of 20 percent to 30 percent less than what their male colleagues earn."

Well, the Karma thing sent me to search the word, and most of us would know the definition to be the principle of causality, where intent and actions of an individual influence the future of that individual. The word is rooted in a myriad of religions. Buddhists somewhat contradicted the notion that circumstances spring solely from past suggesting that if that were the case, then Karma is tantamount to fatalism.

Another summary of karma, "what goes around, comes around." Indeed, that is what Mr. Nadella nearly stated during the conference.

"It’s not really about asking for a raise, but knowing and having faith that the system will give you the right raise. That might be one of the initial 'super powers,' that quite frankly, women (who) don’t ask for a raise have. It’s good karma. It will come back."

Well Mr. Nadella, there is a lot out there on the use of “karma” if you just “Bing” it.

This illustration is one of the first images that appears on the browser results. Maybe this picture will make it a bit clearer for you.

*Reference to October 2014 Time article "Microsoft CEO Tells Women It's Bad Karma to Ask for a Raise," as reported by Laura Stampler

Topics: Women in Business, Managing Your Career, Advocating for Yourself