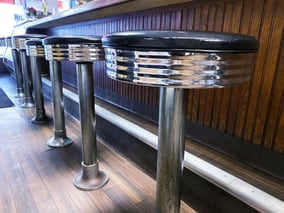 In the early 60s, in the small town of Ravenna, Ohio, in the northeast corner of the state, you could walk into Isaly’s, the corner drugstore, at 6am on any given morning. The morning ritual didn’t change much: take a stool at the counter, order a cup of coffee and a doughnut, and meld right into the lively conversations happening around the counter, which were typically among all men in this small manufacturing town of 12,000, many of whom were WWII vets. In some of the exchanges, the men talked about the squads they were in and memories of those moments, but most of the exchanges were about how people were feeling that day – what the prospects were of winning the big game against the rival high school, or sometimes, delving into their hopes for the future for their kids and for their town.

Occasionally, added to the scene was a 6-year-old girl sitting next to her dad, eating her Frosted Flakes right out of the mini cardboard box they came in. At the L-shaped counter, dad and daughter were always seated near the corner of the L. The little girl’s presence didn’t change the conversations or cause them to dwindle. The exchange continued, the jokes continued, and the enjoyment around the counter was evident.

I loved “Magic Hour” at Isaly’s – those occasions when dad would include me in his morning ritual of coffee counter conversations. As one of seven kids in my family, I would often get up early to accompany my dad for the one-to-one time. Plus, I got to see him in a very different environment. I loved watching the conversations happen, even though at the age of 6, I often didn’t know what they were talking about. I could feel however, that they truly enjoyed this first hour of their day, checking in with each other and listening to important things happening in their lives.

I went to Magic Hour quite often through my early years, until I got into my teens. It didn’t dawn on me, until years later when I was in my 40s and my dad was no longer with us, what was actually happening during those special 60 minutes each morning. You see, my dad and his two brothers ran a Foundry that employed 200 people in town. After WWII, my dad started in the business as a salesman, and over the years, worked his way up to President. At the time when I used to join dad for Magic Hour, he was a VP.

I now see how important Magic Hour was to my dad. It was his chance to listen to, and engage with, the employees in casual, yet important, personal time. At the counter, there was no hierarchy and the other men were comfortable and open in their exchanges, even with their “boss” sitting right there.

A recent Simon Sinek video brought up this recollection of Magic Hour. The topic of Simon’s discussion was that the two most important leadership attributes are Empathy and Perspective. You need to actively listen to your people and what is important to them, understanding the personal challenges they may be going through that could impact their performance on the job. Working your way up in an organization, your perspective needs to change as a leader. In Simon’s words, “You used to be responsible for the job, and now you are responsible for the people who are responsible for the job.”

I have a better appreciation now for my dad’s Magic Hour. It was his time to listen, to understand, and be there for his team. It was not his time to have hierarchy, but to have community. It was his time to gain new perspective, not from a smart thought leader or author, but from the groundup view of everyday life.

I know my dad was one of those amazing leaders because of the kind words spoken during his funeral. Not only did his employees tell me how he touched their lives, but wives and children also stopped to tell me how happy their husbands and fathers were working in the Foundry.

I know we have lost Magic Hours, and they are tough to recreate in a virtual environment. However, I think if we employ the simple principle of “sitting around the counter” - swapping ideas, stories, challenges, fears, and hopes - we can demonstrate that we care. We can listen and we can value each other as humans who happen to work for the same company. As leaders, it is our responsibility to create this inclusiveness for our teams and our companies.