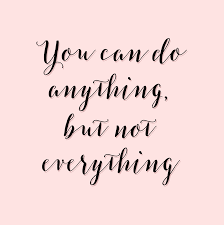 “I’m sorry,” she told the event coordinator for her industry association. “I can’t make it for the panel. Another VP just scheduled a meeting for me, and I’ll have to be traveling internationally that day.”

I’ve seen this movie… hundreds of times. After running leadership programs for accomplished women leaders and interviewing more than 1000 female executives, I see some noticeable differences between those that are driving up the ladder and the ones who make it to the top. I can, fairly accurately, pick out those that will be successful based on simple things, such as how they manage their priorities.

From where I sit, the accomplished executives that make it to the C-suite have learned how to set boundaries around their time.

They are vocal about what they stand for, intentional on where they spend their time, place priorities on what matters the most, and ultimately OWN their path. These are the women that rarely cancel any appointments. They do what they say they will do, and they plan their calendars accordingly.

Too often, I see rising (and fabulous) leaders commit to an external event, which should be a priority because it will expand their knowledge and increase their professional and company reputation, but then cancel at the last minute. Notwithstanding the last-minute-true-emergency-meeting called by their bosses, I see women with huge potential in mid to upper management roles have a hard time setting boundaries around their time. I know the rationale is, “I don’t want to let my boss/company down.” However, I know from experience that it truly means, “you just let yourself be run over.”

Teresa Purtill, Head of Customer Operations at Bord Gais Energy, shows us what it might look like if we set those boundaries. She found it to be a big win for her company, her team, and herself.

Two weeks before she was scheduled to sit on a panel for The Signature Program, Teresa received a last-minute notice calling her to a budget finalization meeting on the same dates. She was to present her ‘year-forward’ budget to the CFO.

She thought, “Typically, everything that’s good for me goes out the window when I am panicked. Normally, I would drop everything and attend the budget meeting, but this time, I’m not going to ask. I’m going to tell.”

Teresa told her boss, “I appreciate that next week is going to be very busy, so I briefed Nicola to attend the budget meeting in my absence.” Her boss asked where she was going, and she replied, “I’m committed in Brussels for a panel, but Nicola will represent us well.”

Teresa, in a moment of doubt, relayed to her husband that she was insane to go to Brussels when she had this meeting with the CFO. But, she also realized that she had a pattern of not taking care of herself in her career thus far. Being on panels at The Signature Program gave her energy, and it’s when she needed this type of attention the most that she hadn’t stuck to her plan and let everything spiral downward.

Teresa consciously set her boundaries and learned this decision was the right one… it was a win for her as she spent time getting re-energized, a win for Nicola as she had a development opportunity by presenting to senior management, and a win for the company as they had a more fully developed team and a re-energized leader to lead it.

What tips would you give for how to set boundries at work and home?