What’s your definition of Success? 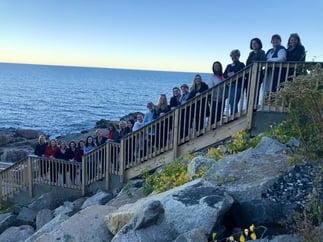 In 2012, I was passed over for a CEO position, one I thought would be mine. I desperately wanted to be a CEO. I had worked for a few examples of “not so great” CEOs, and I just knew I could do it better. It was the next step in a successful career. It was what I knew everyone expected for me.

When I didn’t get that role, a competitor hired me to be their CEO, and I jumped at the chance. I had a noncompete, so I had to sit on the sidelines until that clock ran out. While I waited, I got a different perspective of this new employer. I watched the politics at play. I watched decisions move forward without my input. I saw a work culture that I didn’t want to be a part of. The importance of advancing in my career to the next step of CEO had blinded me to the other things I should have been considering.

Last week at Signature Surge, we had a chance to hear from Ryan Leak, author of Chasing Failure: How Falling Short Sets You Up for Success. He asked us 5 key questions that we should consider to ensure we are leading our teams and living our lives in the way we want. One of those questions was: “What is your definition of success?”

Around the same time I was pursuing this title, I was beginning the process of being separated from my now ex-husband. I had to wonder, “Had I been overinvesting in my career, and underinvesting in my life?” One thing Ryan said brought back the pain from the lack of success in my marriage.

I started Signature in 2013. My kids were both young adults and off on their own. I was divorced. With Signature, I finally had a feeling of true passion for my work. I had been thinking about Signature for several years, but I hadn’t had the courage to go for it. It was my first entrepreneurial venture, and my fear of failure gripped me often. I was a company of one. I was the designer, the faculty, the marketing and sales team, the billing department, and the person who prepared, shipped, and set up the materials for the program.

After having wanted that CEO title so badly, I could have easily called myself a CEO, but I did not. I had realized it wasn’t about the title. I gave myself the title Founder, but my role was Chief Passion Officer. I knew if I could help one female leader visualize and reach more potential than she thought she was capable of, then I had won. Eight years and 1800 female graduates later, I get to experience that feeling of helping someone else quite often. It is my purpose, and I am finally driven by my definition of success, and no one else’s.

I fell short getting the CEO position years before, but that failure set me up for wild success I had never known before. Sometimes, you have to pull back, like the arrow on a bow, before you can unleash your full force.

There is one last thing Ryan said that I would like to leave you with as you head into the holiday season – a great time for reflection:

“The vision you have for your life should be larger

than the one others have for you.”

What is your definition of success?

Topics: Women in Business, Managing Your Career, Advocating for Yourself, Presence